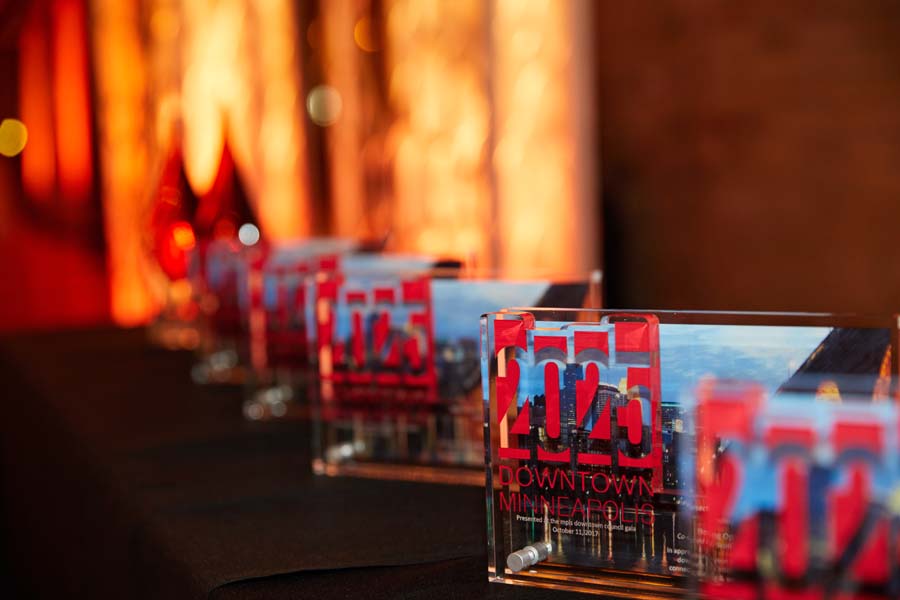 Each year, the mpls downtown council (mdc) honors people, organizations and initiatives making a significant impact on downtown Minneapolis’ vitality through its Intersections: The Downtown 2025 Plan Leadership Awards. Tonight, mdc will honor its 2019 award recipients at its annual mdc gala presented by YA taking place at Renaissance Minneapolis Hotel, The Depot (225 3rd Ave S). The awards ceremony begins at 7 pm.­­

The mdc will honor eight 2025 Plan leadership award recipients selected thanks to its contributions to downtown that impact several areas of the mdc’s 2025 Plan.

“We are thrilled to honor another fantastic group of individuals, organizations and initiatives who have made significant impacts on the 2025 plan’s goals through their leadership,” said Steve Cramer, president & ceo of the mpls downtown council. “It takes a community to make a downtown extraordinary, and this year’s 2025 plan leadership award winners are a testament to the progress that can be made throu­gh hard work, partnerships and a vision for building a vibrant 21st Century City.”

The mpls downtown council issued a call for nominations for this year’s 2025 Plan Leadership Awards in August, asking its members, 2025 Plan committee leadership, volunteers, and the public to nominate individuals, organizations, or initiatives that have impacted The 2025 Plan’s 10 main goals over the past 12 months. Those nominations were compiled and selected by the mdc’s leadership team.

Doors Open Minneapolis launched in 2019 as a weekend-long event that allows the public free, behind-the-scenes access to buildings in the City of Minneapolis that are architecturally, culturally or socially significant. The event featured 112 venues throughout Minneapolis and welcomed 17,841 unique visitors, 71,687 total visits and 1,340 volunteers. It also garnered 1,429 engagements on Instagram and 1,040 submissions for a social media contest which offered a chance to be the featured image for the 2020 event. Doors Open provided a chance for the community to come out and not only explore but also celebrate Minneapolis.

The Downtown View housing development, a collaboration between YouthLink and Project for Pride in Living, offers housing for youth ages 18 to 24 who are experiencing homelessness. Downtown View offers 46 studio and quad-style units that provide people 18-24 years old experiencing homelessness time, space and resources to help provide a foundation for a successful future. Many of these young adults have experienced homelessness during much of their youth and are at a pivotal crossroads for gaining stability. Downtown View provides much needed services for these young adults to develop a plan to live independently. During their stay, YouthLink encourages learning to budget, grocery shop, cook meals and establish transit options. The first of its kind downtown, the Downtown View apartments are giving those in need stable housing during a critical moment in their lives.

Mark Huting has made an incredible impact on North Loop greening over the past several years. As the go-to person on the North Loop Neighborhood Association board for all things related to trees and landscaping, Mark has led many improvement projects, including drawing up plans and raising funds to put in street tree planting beds on Washington Avenue and an ambitious beautification of MnDOT right-of-way in the neighborhood. He has also given helpful nudges to countless other projects, including reviewing development proposals to ensure that their landscaping plans match the neighborhood’s high expectations and representing the neighborhood in discussion about new parks and park-like spaces yet to come. As downtown’s residential population continues to grow, the work of committed individual residents like Mark to make it a more beautiful and livable place is invaluable.

Reaching the 2025 Plan goal of leading the nation in transportation options requires improvements to every mode, and the speed, reliability, and user experience of bus service into, through, and out of downtown is a huge part of that equation. The C Line Bus Rapid Transit line started service in 2019, and it represents a dramatic upgrade for downtown’s transportation options. Running from Downtown to Brooklyn Center, the C Line delivers a faster trip and an improved transit experience. Buses run 25% faster and bus stops are substantially upgraded to include features comparable to light rail.     Services like the C Line transform the experience of taking the bus downtown, making it a service with far broader appeal. This was a well-conceptualized project that is already improving the daily lives for members of the downtown community.

Minneapolis City Council Member Lisa Goodman was part of the Peavey Plaza restoration conversations since the very beginning. Peavey Plaza officially reopened this summer with resorted fountains and water fixtures, new trees, grass and planting, enhanced lighting and improved accessibility. It opened in 1975 and was a gathering space for decades before accessibility issues and water pipe maintenance made it difficult to keep the space functioning properly. Over the past decade-plus, Council Member Goodman worked closely with local leaders and organizations to keep Peavey Plaza’s revitalization possible. When the space re-opened in July 2019, she was part of the ribbon-cutting festivities and was able to celebrate in a project she supported from the very beginning. Peavey Plaza is again today a gathering space for all who live, work and visit downtown—a must-see destination that provides an incredible experience for those who stop by—and Council Member Goodman’s leadership played a major role in making it possible.

The Armory has long held significance in downtown Minneapolis. It was once the most expensive building in Minnesota, it once was home to the Minneapolis Lakers, and it has also hosted concerts, political conventions and music videos by Prince and Aerosmith. But after decades of use as a parking ramp, The Armory was refurbished and opened in 2018 as a premier Minneapolis entertainment venue. Over its first year-and-a-half of operation, The Armory has hosted incredible standalone concerts as well as festivities for Super Bowl LII, the NCAA Final Four and X Games, prime national boxing events, corporate gatherings and more. It offers Minneapolis a music venue ideal for 2,000-10,000 concert-goers, which downtown lacked prior to its opening. The Armory’s revitalization not only brought energy back to a historic location but also added vibrancy to our downtown core.

Along with the award presentation, tonight’s mpls downtown council gala will include networking, dinner, updates on The 2025 Plan and musical entertainment.

Following the event, photos and logos will be available at www.mplsdowntown.com/media. For more information on the mpls downtown council gala featuring the 2025 Plan Leadership Awards, follow @mplsdowntown on Facebook, Twitter or Instagram, or use the hashtag #2025Plan.