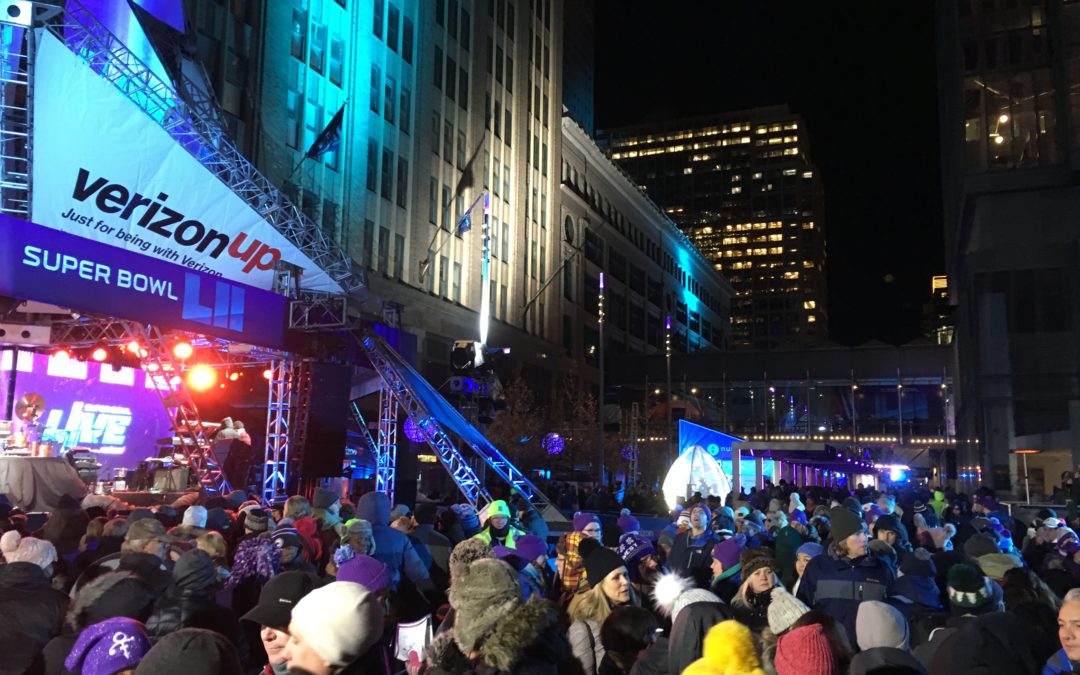 The two weeks leading up to Super Bowl Sunday capture national and international attention—people around the world tune in, and when they do, they see the host city front and center.

It was the Minnesota Super Bowl Host Committee’s job to provide an experience leading up to Super Bowl LII in January/February 2018 that would not only engage those in attendance but show well around the world.

Because of its overall impact on downtown Minneapolis, the Minnesota Super Bowl Host Committee was selected as the 2025 plan impact award winner. It will be recognized on October 2 at the mpls downtown council annual gala.

The Minnesota Super Bowl Host Committee’s work embodied the 2025 plan’s mission across the board. It was an economic boon for downtown Minneapolis and the surrounding area, which overall not only helped downtown businesses but also created opportunities for national and international exposure for our businesses within the community.

It provided a downtown experience unlike anything we’ve experienced before. The Super Bowl Live along Nicollet provided a must-see attraction for 10 days leading up to Super Bowl. Free concerts, games, activities, meet-and-greets, food, skating and much more were available all along Nicollet. The zip line across the Mississippi River was an incredible draw for people to take part in that was talked about long after the event concluded. The Super Bowl Experience at the Minneapolis Convention Center provided another great opportunity for people to play games, take photos with the Lombardi Trophy, see a traveling Pro Football Hall of Fame exhibit and more. High-profile concerts took place at The Armory. And all around U.S. Bank Stadium you were able to see people getting excited about the big game.

The Minnesota Super Bowl Host Committee’s Crew 52 volunteer squad attributed to the overall downtown experience vibe. The team of 10,000 helped direct pedestrians on the street and skyway levels, help with people looking to take photos, and much more. The Crew 52 volunteers were lauded for their willingness to step in and participate.

The Minnesota Super Bowl Host Committee’s legacy work and green focus also aligned with the 2025 plan’s initiatives. But perhaps its biggest impact is the model by which it showcased how major events can interact with our downtown space. With the NCAA men’s basketball Final Four coming in April, with potential for other events coming to our downtown community in the future, and for smaller scale gatherings that can activate the public realm, the Minnesota Super Bowl Host Committee’s work created a strong method for success.