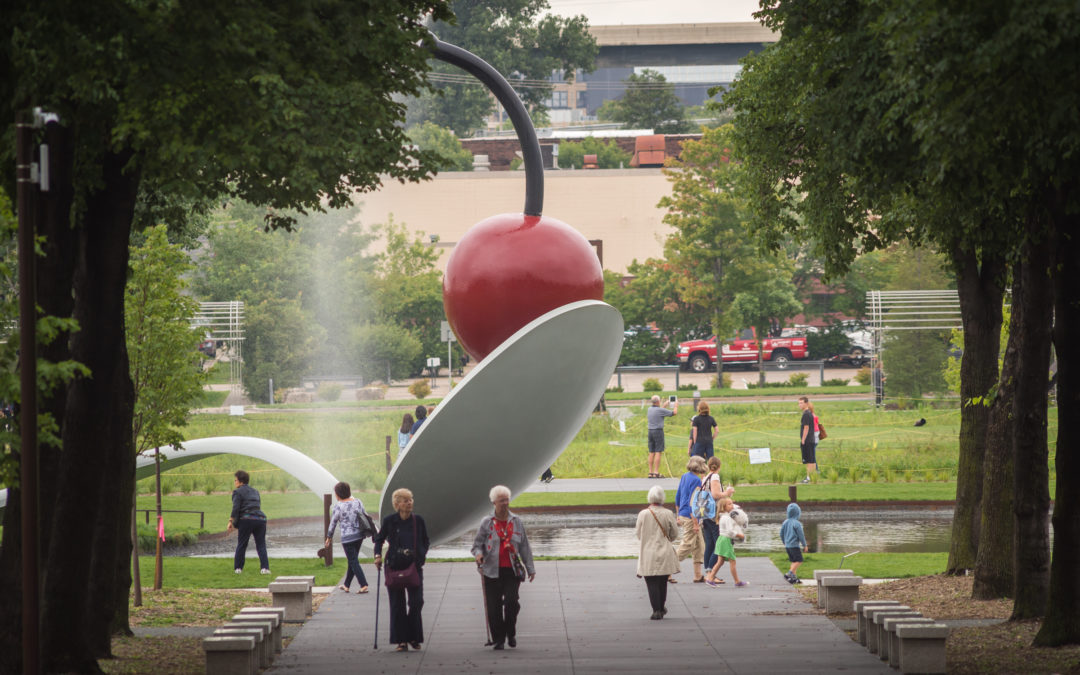 When did conversations about renovating the Minneapolis Sculpture Garden begin? What were the initial thoughts on how to renew this iconic space?

As the Minneapolis Sculpture Garden was approaching its 25th Anniversary in 2013, the Walker and Park Board agreed that is was showing wear and tear after many years of heavy use.  More than 9 million people had visited the Sculpture Garden since it opened in 1988 and the place was literally being loved to death!

As we began to think about how to renew the Garden, we quickly agreed that its infrastructure, including the Cowles Conservatory, needed to be reconstructed in a sustainable manner to serve visitors now and for generations to come. Thanks to the support of citizens of Minnesota, the state legislature, and Governor Mark Dayton, the Park Board received $8.5 million in public bonding support to fund the much-needed reconstruction of the park, which includes new infrastructure, irrigation, walkways, retaining walls, and other physical assets. In addition, the Mississippi Watershed Management Organization provided $1.5 million for innovative stormwater management systems in the project. The Minneapolis Sculpture Garden Reconstruction Project launched in tandem with updates to the Walker’s own campus across the street, including a new plaza and entrance, an expanded front lobby, the destination restaurant Esker Grove, a more pedestrian-friendly Vineland Place, improved accessibility, and a landscaped, art-filled hillside.

Additionally, the Walker invested approximately $15 million to reinstall and commission new works for the Minneapolis Sculpture Garden. This allowed the Walker to build on the 40-plus artworks already located in the Minneapolis Sculpture Garden and on the Walker hillside with new commissions, green spaces, a new entry, and enhanced city streetscapes. Favorite artworks returned along with the addition of 17 new pieces by artists from Minnesota and around the globe.

The bottom line is that the Walker and Park Board wanted to create a more welcoming and environmentally sustainable Garden for the 21st century.

The need to reconstruct infrastructure in the Minneapolis Sculpture Garden provided unique opportunities both for the landscape and the art program. The new design for the Minneapolis Sculpture Garden and the Walker campus takes advantage of the latest sustainability technologies, including a green roof over the main entry of the Walker, rainwater collection for reuse in the Garden, and a greening of the streetscape along Hennepin Avenue. The period of infrastructure reconstruction meant that the art works needed to be removed for a period of time, which allowed the Walker to think about the opportunities for combining existing works (favorites like Deborah Butterfield’s horse sculpture Woodrow, or George Segal’s Walking Man) in dialogue with new sculptures by another generation of artists. As part of the creation of newly landscaped sites for art, more than 300 new trees were planted in these outdoor spaces and a broad variety of native plants. Across the entire 19-acres of the Garden and Walker campus, 17 new sculptures by an international roster of artists are now installed. This selection includes six new site-specific commissions, such as September Room by the Dutch artist Mark Manders, a monumental grouping of five bronze forms that is the artist’s first major outdoor piece, and his first permanent public work in the US. Other commissioned artists include Nairy Baghramian (Iran), Theaster Gates (US), and Aaron Spangler (US; from Park Rapids, MN). Some of the new sculptures, including Katharina Fritsch’s blue rooster Hahn/Cock and Eva Rothschild’s Empire—have already become visitor favorites in the months since the re-opening.

How many sculptures were reallocated to different areas of downtown? Where are some of those spaces that are now enjoying art because of the Sculpture Garden renovation?

During the period of construction on the Garden, the Walker forged local partnerships across Minneapolis to relocate several beloved sculptures through long-term loans, allowing the works to remain accessible to the public. The partnering organizations have agreed to the arrangement for up to five years, after which they will be reevaluated. Among the works currently on view in areas other than the Garden are Frank Gehry’s Standing Glass Fish, currently at the Gehry-designed Weisman Art Museum; works by Tony Cragg, Mark di Suvero, Brower Hatcher, and Charles Ginnever at Gold Medal Park, made possible with the partnership of the Gold Medal Park Conservancy Fund; and Jacques Lipchitz’s Prometheus Strangling the Vulture II in the outdoor courtyard at the Minneapolis Institute of Art.

How many people visit the Sculpture Garden daily? Annually? Do you or have you experienced an increase in visitors since the renovation wrapped up?

This summer, we have had an unprecedented number of visitors in the Garden. The monthly totals are almost two times what we have experienced in past summers.

Our past monthly average has been approximately 34,000 visitors.

How would you describe the experience at the renovated Sculpture Garden to someone who has not yet been there?

The first public/private urban sculpture park of its kind, the Minneapolis Sculpture Garden has served as a city oasis and a model for urban sculpture parks nationwide.  A hub of constant activity, the Garden is a place for a wedding in progress, a child discovering new a favorite sculpture, a family picnicking, teens taking selfies, runners coming through with a dog in tow, or friends playing mini-golf together.   It has become the Twin Cities’ beloved, community gathering spot for all ages and interests.

Beautifully designed by Tom Oslund of Oslund & Associates, the Garden is home to more than 300 new trees, better entry points for visitors from the all surrounding neighborhoods, more accessible pathways throughout the park, and clear sight-lines to the city.  The south side is shady and lined with thought-provoking benches by artist Jenny Holzer to allow visitors to take in the mix of figurative and abstract art all around.  Anchored by Kris Martin’s silent bell For whom… (2011), the Garden’s north end features a “fresh meadow” filled with deep-rooted flowers and native plants that attract birds, monarchs and bees.  Paths through the landscape connect three manicured circles for large-scale sculpture, including the most-talked-about artwork by artist Katharina Fritsch called Hahn Cock (2015), a giant ultramarine blue rooster that stands more than 20 feet tall.  At the center of the Garden remains the famous Spoonbridge and Cherry (1985–1988), sculpted and designed by the husband-and-wife team Claes Oldenburg and Coosje van Bruggen.

The renovation allowed the Walker to build on the 40-plus artworks already in the Sculpture Garden and on the Walker campus.  Home to iconic works by Ellsworth Kelly, Henry Moore and Alexander Calder, the Minneapolis Sculpture Garden has welcomed the next generation of leading international artists Nairy Baghramian, Theaster Gates, Robert Indiana, Kcho, Mark Manders, Matthew Monahan, and Eva Rothschild.

How did the Walker Art Center and Minneapolis Park & Recreation Board work together to help make this vision of a renovated Sculpture Garden a reality?

Created nearly 30 years ago as a partnership between the Walker and Park Board, the Minneapolis Sculpture Garden was among the first major public/private urban sculpture parks of its kind in the United States and has served as a model for such parks nationwide.  In other words, the Walker and Park Board have a long history of working collaboratively to make the Sculpture Garden one of the crown jewels of the park system.

The first thing the Walker and Park Board did together to make the renovation a reality was to seek funds for the project from the State of Minnesota and we were fortunate to secure $8.5 million in public bonding support to fund the reconstruction.  In addition, the Mississippi Watershed Management Organization dedicated up to $1.5 million for stormwater management systems.  The Walker also raised and spent millions of dollars to commission and purchase new works of art for the Garden.

The Park Board’s plans for the reconstructed Sculpture Garden, in partnership with the Walker, were designed by Oslund & Associates, an award-winning landscape design firm based in Minneapolis. Snow Kreilich architects also helped to transform the Cowles Conservatory into the Cowles Pavilion.

The renovation relied heavily on community feedback to guide the design process. As part of an open Community Advisory Committee process, the Park Board relied on public representation from a number of constituencies—neighbors, business, and elected representatives. The Walker engaged a similar array of key community members to review and inform its campus plans.

To you, what is the biggest impact this project has on downtown Minneapolis?

What do you enjoy most about downtown Minneapolis?

We believe downtown Minneapolis is unique in how it provides such a wide variety of places to work, live, and play.  It also says a lot a about this community that it can boast of having both world-class cultural amenities and an award-winning park system downtown.  Residents and visitors to our city center have so many wonderful options on how to spend their time between the western and eastern gateways of the city.

For us the 2025 plan represents an unprecedented coming together of public/private partners, corporate and cultural/educational institutions, and city government to envision the city’s future together.  We were new leaders in the Twin Cities when we were invited to participate in the 2025 planning project. This participation allowed us to meet so many cross-sector colleagues around town with whom we have continued to work and collaborate to realize the Minneapolis Sculpture Garden and Walker renovations.  That planning effort fostered an important culture of trust and collaboration that has enabled many partners to leverage mutual investment and expertise for the betterment of downtown Minneapolis. —Olga Viso, Executive Director, Walker Art Center and Jayne Miller, Superintendent, Minneapolis Park and Recreation Board