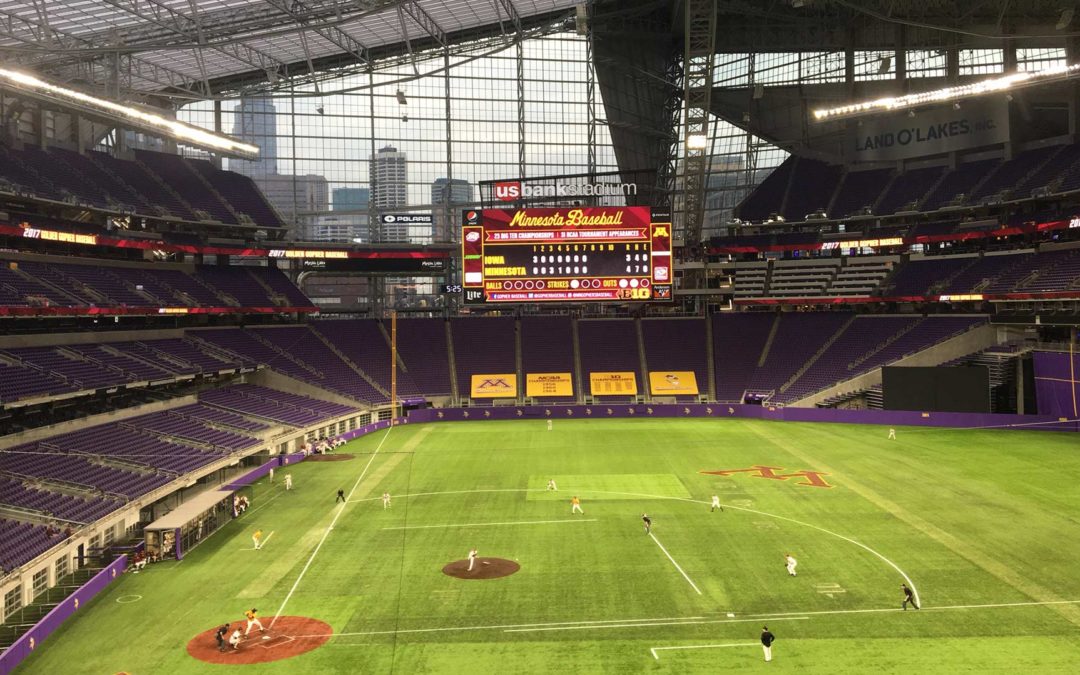 Like most Minnesotans who grew up over the past 30 years, I spent a fair amount of time watching baseball at the Metrodome during my childhood. Being from southwest Minnesota, we took annual trips up to Mpls to watch the Twins, and for me that tradition extended from Kent Hrbek and Kirby Puckett to Joe Mauer and Justin Morneau.

It also came with a great deal of traditions that stuck with me from elementary school to college at the U.

Part of that tradition included the game day experience outside of the ballpark. It included stopping in at Huberts across the street by 6th and Chicago. It included spending some time on the concourse outside the Dome, grabbing tickets at the box office before heading in and watching baseball that afternoon or evening. I even played at the Dome twice as a high school baseball player—my hometown Cardinals played a regular season game against Buffalo each year, usually during a three-hour rented window late at night.

When the Twins moved across town to Target Field in 2010, I was thrilled that they moved into a beautiful outdoor facility while also feeling a bit of nostalgia being lost at the Dome, where so many great baseball memories were formed with my parents, my friends and my family.

So on Sunday when I watched my first Gophers baseball game at U.S. Bank Stadium, memories came rushing back.

I went to the game with a group of friends and had the opportunity to see our brand new downtown stadium in a whole new way. It was the first time I watched baseball on that location since the Twins’ last season there in 2009, and the whole experience really took me back.

We ate at Erik the Red Bar & Nordic BBQ to start the day, a mpls downtown council member that now occupies Huberts old location at 6th and Chicago. They have great food and a fun atmosphere for people who are getting prepped and ready for a sporting event across the street.

As we crossed the street and headed toward U.S. Bank Stadium, we walked by the large Vikings Legacy Ship with an enormous screen that makes up the sail of the ship. It’s a beautiful work of art outside the stadium—a display that dwarfs the Metrodome’s old sign that once stood in its place. But it reminded me of our old trips across 6th Street and passing the Dome’s old sign as we walked into the stadium. Shortly thereafter, we walked up to the box office to grab our tickets like we once did for Twins games a generation before.

Then came the big moment, when we walked into U.S. Bank Stadium and found our seats. For as different as these stadiums are—and there is a big difference—the act of watching baseball on the same footprint we did for so many years brought me way back. The Gophers won, which was a bonus, but the real victory on Sunday was living through those little moments that made you remember what it was like growing up and falling in love with what Mpls has to offer all over again. Our downtown has that type of impact on people throughout the generations, and it’s pretty special to experience it again.

If you’re available, watching Gopher baseball at U.S. Bank Stadium during the early spring months is a great way to re-experience some of the old traditions you might have had when baseball was on this side of downtown. And it’s a fun way to see the stadium if you haven’t yet experienced it since it opened back in July.

As always, if you do head to downtown for an event, share your story with us. Tag your social media posts with #mymplsdt and #mplsdowntown. We’d love to see how you’re enjoying the downtown environment.