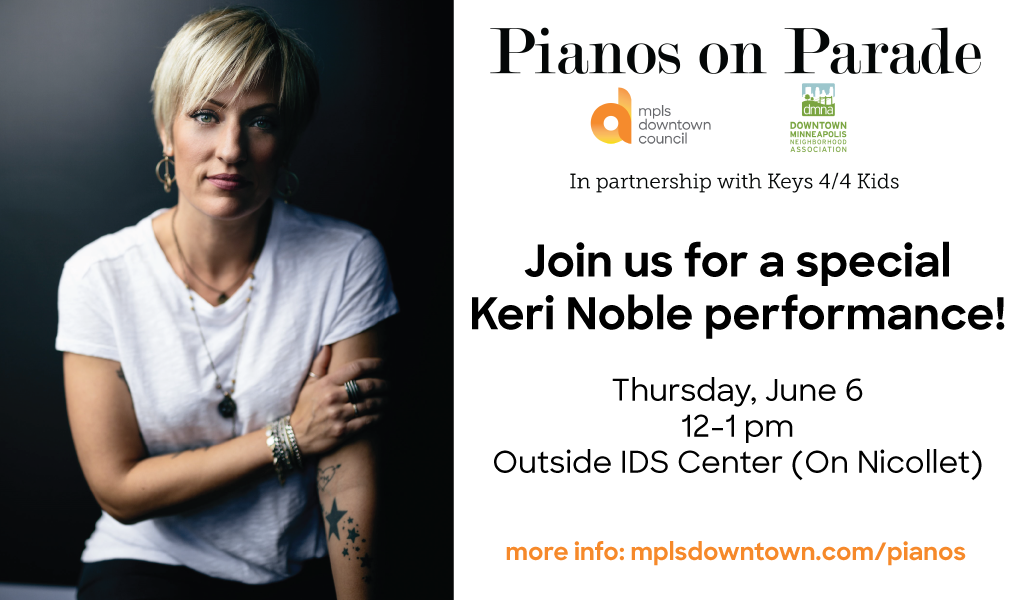 The mpls downtown council is excited that Keri Noble will be performing to help kick off this year’s Pianos on Parade in downtown Minneapolis! Join us on Thursday, June 6 outside IDS Center from 12-1 pm to hear Keri perform live just steps away from the Nicollet Farmers Market.

A transplant of Detroit to Minneapolis, Keri is a piano-driven singer/songwriter whose passion and penchant for living on her own terms radiates from her music. Her 2009 album, “Keri Noble”, included the song “Emily” used on the TV Show “Grey’s Anatomy” and an appearance on CBS’s Early Show. Kelly Clarkson recorded her song “If No One Will Listen” and included it on her Grammy-nominated album “All I Ever Wanted.”

Keri became a regular on KFAN in 2011, then became a full-time radio personality in 2012, co-hosting “Oake and Keri in the Morning” and later “Keri and Greg in the Morning” on Cities 97 through November 2018. She gives voice lessons, which rekindled her passion for creating and performing music, and on the same day she left Cities 97 she released her latest collection of music, “Hurricane.”

Join us to hear Keri perform as we begin another June of music through the Pianos on Parade program, produced by the mpls downtown council and The Downtown Minneapolis Neighborhood Association in partnership with Keys 4/4 Kids. Throughout June, enjoy 25 pianos painted by local artists to evoke “The Spirit of Minneapolis” throughout the downtown area. Stop by and hear Keri perform as we launch the 2019 Pianos on Parade!