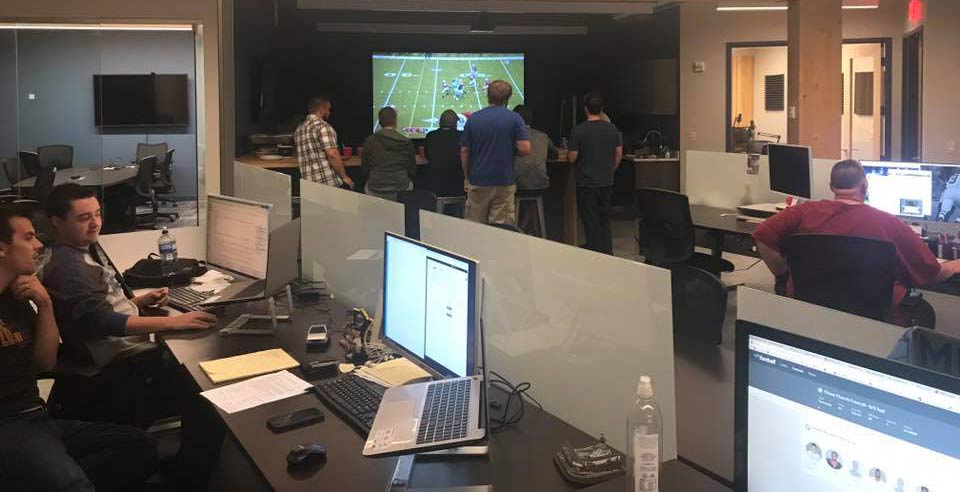 Fanball CEO Rob Phythian and his team are a forward-thinking group. Their focus is continuing to grow and develop each year, and although he characterizes the organization as a “tech startup” they have the experience to make their vision a reality.

“I would characterize this team as senior entrepreneurs,” Phythian said. “We’ve done it before in some way, shape or form.”

“First and foremost we’re a software development company,” Phythian said. “We’re always on the lookout for good product people, good developer talent. We’re going to continue to grow at a pretty good clip. We want people that have the ability to code, manage products and design to know about us.”

Fanball’s vision fits into the mpls downtown council’s 2025 Plan mission to bring new companies into the downtown community. The key to Fanball’s move is attracting and retaining talent while maximizing visibility. Downtown’s proximity to mass transportation, nightlife, sports, entertainment and dining all play into luring some of the top software developers and tech professionals to join their staff.

In today’s competitive environment, Fanball is looking to differentiate itself as an employer. Their move to downtown is helping them do just that.

“As we grew, we knew we needed to be downtown to attract top talent,” Phythian said. “The visibility is important to us.”

Fanball resided in Northeast Minneapolis since October 2015. Their organization has fantasy sports veteran leadership like Phythian, who entered the market in 1993. They offer fantasy sports fans the opportunity to play in season-long leagues or daily competitions. And the market continues to grow—more than 57 million Americans play fantasy sports.

But what sets them apart is their vision for evening the playing field for everyone interested in participating.

Phythian said current leagues are not necessarily set up for each individual to potentially succeed, because novices can be matched up with those who possess incredible background knowledge about players and leagues. That makes for an unfair advantage, and Fanball is initiating a handicap system that helps put players of similar skill levels against each other.

Each player has a Fanball number, ensuring that when you play you aren’t competing against an expert every time.

“Handicaps have been implemented in golf and chess—we’re implementing them in fantasy sports,” Phythian said.

That’s the type of foresight and expertise they’re bringing to their business, and they’re looking to continue building their brand while being located here in the downtown area.

Phythian said being located near the light rail has already positively impacted their business both for employees commuting and for having nearby transit access for clients visiting from out of town. They’re also enjoying the capabilities of the T3 building itself, which finished construction in late 2016 and is lauded as a cutting edge facility in the tech community.

“We’re looking for the differentiator, and T3 was that differentiator,” Phythian said. “It could be the final tipping point for people deciding to join us.”

It’s clear the Fanball crew loves what they do, and they’re excited to nestle into the downtown community and provide fun fantasy sports gaming for years to come.

“I really do think we’re in the sports entertainment industry, and we’re offering fantasy games for all generations to enjoy,” Phythian said. “The type of games we’re building we’re hoping are fair and competitive, which the market hasn’t done well to date. That’s our opportunity.”